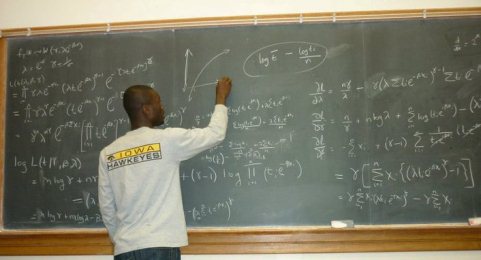 The Bachelor of Science in Statistics requires a minimum of 120 s.h., including at least 14 or 15 courses for the major, depending on the emphasis track chosen..  Students complete 10 core courses that provide essential instruction in statistical methods, applications, and theory. In addition, they concentrate on their particular interest areas by choosing one of the following three emphasis tracks, in which they complete at least four or five courses.

* Equivalent transfer courses for Cal I and II taken with 4 s.h. are acceptable for the program.

The major in statistics requires the following coursework:

All students complete the following.

Students choose one of the following tracks which coincides with completing four or five courses beyond the core.

The following checkpoints list the minimum requirements undergraduate students must complete by certain semesters in order to stay on the university's Four-Year Graduation Plan. (Courses in the major are those required to complete the major; they may be offered by departments other than the major department.)

Much of the work in the discipline is sequential, so students must begin requirements for the major as soon as possible. Individual study plans must be made carefully. Students who first enroll in a spring semester must consult the department to confirm a four-year plan.

Professor R.P. Russo is the undergraduate advisor for declared statistics students admitted to our program.